Mauro Pipani was born in Cesenatico in 1953, he lives and works in Cesena. He graduated in 1976 from the Academy of Fine Arts in Bologna, with Pompilio Mandelli and Maurizio Bottarelli. Master in Sustainable Architecture, interior design. Teacher at the Academy of Fine Arts in Verona for over three decades, he has carried out his artistic activity through painting, drawing and designing. He made his artistic debut in 1972 with the collective “la Comune” group of young artists directed by Dario Fo. In 1973 he participated at the Suzzara prize. In 1975 he was one of the founders of the artistic collective of Via delle Bisce, a group of young artists united by the desire to make socially engaged art. In the ‘70s he collaborated with the cultural magazine “sul Porto” directed by Walter Valeri, Stefano Simoncelli and Ferruccio Benzoni. Dozens of personal and collective exhibitions of national importance, with critical texts by Gian Ruggero Manzoni, Rosanna Ricci, Enzo Dallara, Erica Calvi, Maria Virginia Cardi, Marco Meneguzzo, Maria Rita Bentini, Alberto Zanchetta, Adriano Baccilieri, Edoardo Di Mauro, Giancarlo Papi, Sabina Ghinassi, Claudio Spadoni, Francesca Battistini, Marisa Zattini, Annamaria Bernucci, Camilla Boemio, Raffaele Quattrone and Renato Barilli.

The work is born after a careful arrangement of the materials used. At the beginning he creates the surface of the wooden support on which he arranges carefully, in layers: gauze, fabrics, glued papers, metal fragments, resins that generally characterize the beginning of the creation, both in small or large formats. It keeps everything in a horizontal position, as if it were a page, then only at the “end” verticalizes the image, in order to rationalize it pictorially. During this slow and complex process, the universe of images resurfaces, psychological thinking, which is never premeditated. Creation originates from lyrical visions, emotional fragments that belong to its history, which later became ‘inner world’, establishing what Freud called “relationship between dreams and waking life”: landscapes of places that exist within us, which they connect us with past realities and emotions, expressions of the intellectual life of which we have been spectators or protagonists. They are memories, strong, detailed and symbolic images, which he paints on the rarefactions of overlapping paper materials. Dazzled images, bathed by marine silvers that let you think of brackish scents, writings and blinds on the water, due to excess of light. Almost always there are words that hover in the air like sounds and are the key to reading his work, their gateway. 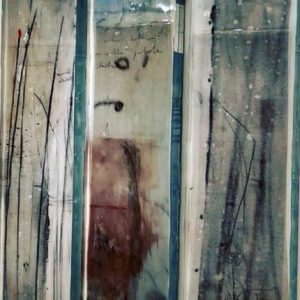 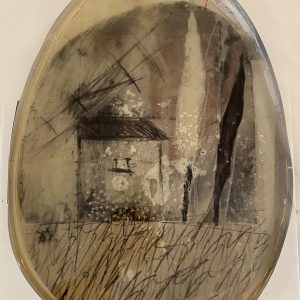