Antonio Nunziante,was born in Naples in 1956, but it was in Turin where his family moved in 1961, that he grew up.  In 1975, after graduating from art school, he enrolled in the Accademia di Belle Arti in Turin and Asti.  In Turin, he attended the lessons in figure painting at the Accademia Libera del Nudo and a specialization course in techniques of restoration in Florence.  It was there that he had an opportunity to learn the secrets of the Old Masters directly from Florentine painters, heirs to the tradition of the Italian Renaissance.  It was in the homeland of Leonardo and Michelangelo that his sensibility was molded by the example of the masterpieces of the Cinquecento.Visits to France, Spain and England added to his experience, bringing him into contact with the work of masters like Dalí, Picasso and Böcklin.  It was the former’s style that had the greatest influence on the works he produced at the beginning of his career.  While the precursor of metaphysical art remained a constant reference, over time he began to make a thorough study of the paintings of that movement’s founder, De Chirico, appreciating both his theoretical ideas and the way he translated them on canvas.  However, his points of reference range from the world of art to that of philosophy, where Nunziante says he finds inspiration in Arthur Schopenhauer and Friedrich Nietzsche in particular.

Nunziante’s poetics have evolved over the years, although he has remained faithful to himself and to a humanist vision, which places humanity at the center of his experience as an artist and a man.  Among the themes he has explored, Nunziante has assigned ever greater importance to myth, as an expression of classicism; to metaphysics understood in its Aristotelian sense as the custodian of beauty, and therefore stripped of the feeling of disquiet imparted to it by De Chirico; humanism, as a profound investigation of man; and surrealism, as a new space for fantasy and illusion. 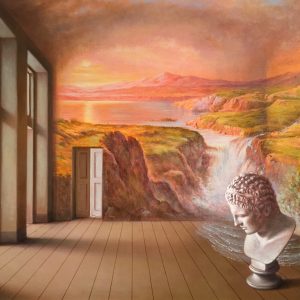 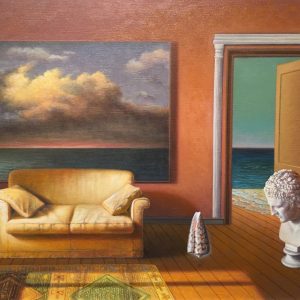 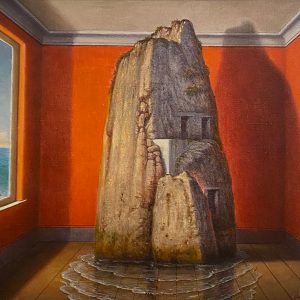 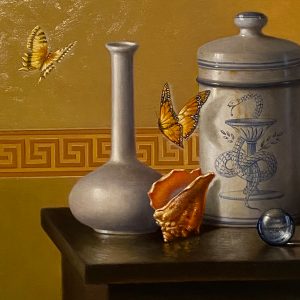 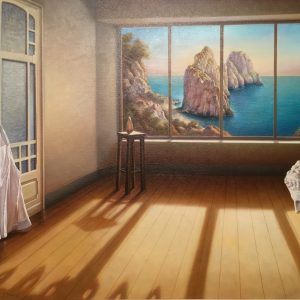 The house on the sea

The house on the sea